There are stories that parents tell their impressionable children that remain with them for their whole lives. I’m not sure why I’m feeling nostalgic, but I’ve been remembering two such stories, one from my mother and one from my father.

Both are set in the dim and distant past, when we lived in Scotland.

I’m a southerner by birth, but we moved north before I was a year old, so my first words were not in the Estuary English of my birthplace, but in the accents of Inverness, where it was said that they spoke the finest English in the world. That said, I don’t have a speaking part in either of the stories.

The first story, told to me by my father was about the time we saw the Loch Ness monster.

Apparently the whole family was on a boat trip on the Loch, but my mother and siblings were somewhere towards the front of the boat, while Dad had me in his arms in the bow. He told me that something crossed the boat’s wake and he was sure that he had seen the monster.

My father was as good as the next at spinning a yarn to keep a small child entertained, but there was never any more detail to this story. And of course extraneous detail is one way to spot when someone is telling lie. So I rather think he did see the monster. And if I was in his arms at the time, then I saw her, too, even if I was too young to remember it. 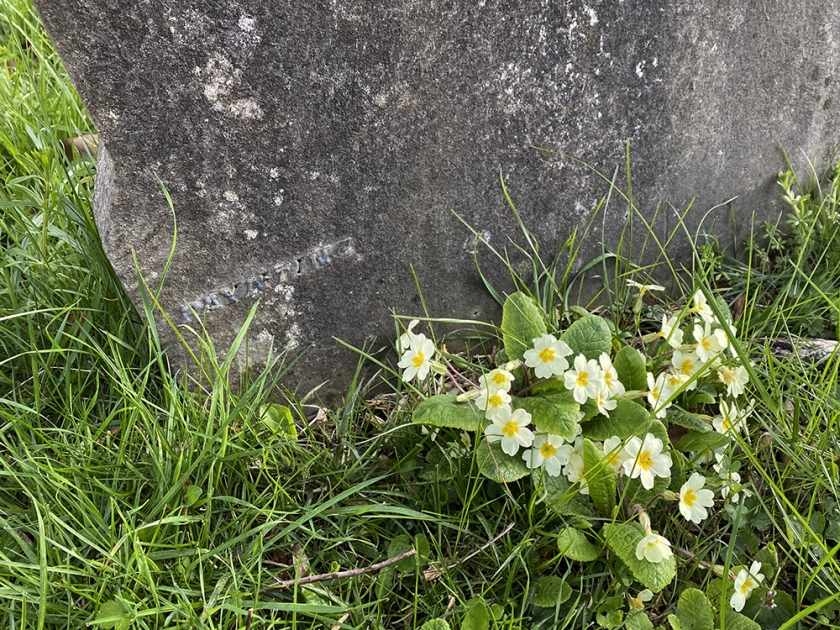 I don’t remember the events in my mother’s story, either, and, again, there was very little embellishment to the facts. Simply put, the family went for a picnic on Inverness’s Fairy Hill and they lost me for a while.

Although I don’t remember what happened, I have wondered if the experience lies at the root of my fondness for cemeteries and graveyards. And I suppose that’s what started me reminiscing today, as I went for a long wander in the local cemetery first thing this morning.

It’s a big old cemetery, but the tombs aren’t very ornate – no family mausoleums, no weeping angels on plinths, just weathered headstones and a few more modern marble grave markers. I found no fair folk among the graves this morning, but the earth was dotted with primroses, cowslips and white violets.

Of course, the fact that I don’t remember, hasn’t stopped me writing my version of the story. For all I know, it may be what actually happened.

My harried mother lost me once on Tomnahurich Hill: she left me
toddling among trees and tombs; she turned her back and

the fairies found me, charmed me, claimed me as their plaything.

Crowned with daisies, harnessed to a chariot, dandelion-light
and gold as buttercups, I hobby-horsed through borderlands
of light and shade, of quick and dull, until the silver bells
she’d stitched to leather harness reins rang out my hiding place
and summoned mother, father, siblings… all the familiar
mundane fools who called me kin.

One thought on “monsters & fairies”