Last time I found a carpenter bee in my pocket, it was alive – at least until I stuck my hand in to find out what was in there and it stung me. 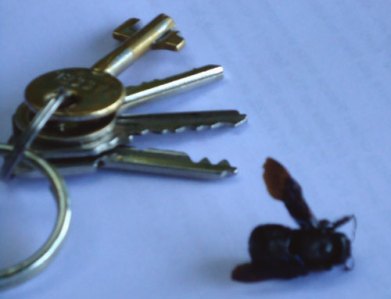 Today, though, the poor thing was already dead when I reached in thinking I must have left a tissue in my pocket when my jeans went in the wash.

I suppose if didn’t put my clothes on straight from the washing line, both of them might have lived, but who irons jeans?

The photo is only intended to give an idea of the size of the creature, and explain why, even desiccated in death, its bulk could be mistaken for a paper hanky. I put the keys there to give an idea of scale, and then remembered this old poem:

What Have I Got in my Pocket?

Paper and pen for making notes
of people, thoughts and random quotes:
things seen and heard around the town;
a conker, smooth, mahogany brown,
picked up while walking in the park,
now lying snugly in the dark
beside a card with a friend’s address on
and scribbled notes for my next lesson,
Swiss army knife, a mobile phone –
for breakdowns when I’m on my own –
a hanky edged with handmade lace,
no glasses, just an empty case,
a wooden key fob and bunch of keys,
a hole, through which slip memories.

For once, the narrator and I seem to have fairly different habits – screwed up paper hankies and carpenter bees don’t seem to belong anywhere on that list.

Elemental voices - the second in the modern Pagan prayers series