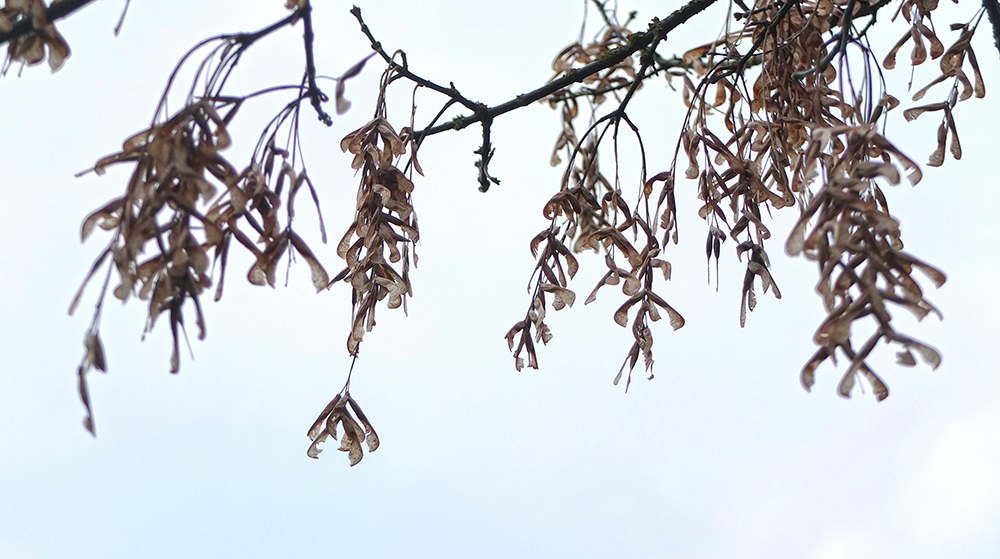 Once more, I’ve sat down at the computer without any idea of what to write. I don’t think I’ve ever really worried about suffering with writer’s block, but often days and weeks go by without any new ideas surfacing.

One reason for continuing with this blog is that it forces me to write something, even if it’s just re-posting a poem from the past; it makes me dig out an image or two to go alongside and forces me to combine words and ideas into some form of logical structure, some kind of complete unit: essentially, it reminds me that however little new creative writing I am doing, I still consider myself a writer.

On a day like today, when I have no idea what to write, it does help that I have thousands of photographs and hundreds of poems to choose from.

Today, with nothing particular in mind, I started by looking through a file of photographs to see if there was anything there to trigger inspiration. I wanted to unlock the flow of words and found a picture of sycamore seeds, hanging like bunches of keys, against a grey sky.

Or perhaps they’re more like those little skeletons that people used to have dangling from the rear-view mirrors of their cars.

Perhaps unsurprisingly, with so many poems to choose from, I can find one to connect – albeit tenuously – to this idea: it certainly has a suitable title.

Although it has appeared on the blog before, it’s seven years since I posted it, so I don’t think it’s unreasonable to post it again. In fact, I think the poem is quite a bit older than that; as I said when I posted it in 2010, it was written as a response to a poetry challenge about ‘forbidden words’:

Everybody knew Aunt Emmeline
was crazy. Like Ada Doom, she’d seen
something – though she never told us
what. Neighbours said
she should be in a home; instead,
she was a part of ours: an icon
of our infancy.

We children loved Aunt Em – she
was a grown up who understood:
she held my hand
when we watched scary films
and, at bedtime, helped me check
for monsters. She shone
at birthday parties, passed the parcel
and charaded with the best, although
she’d never play at pin-the-tail
or other blindfold games. Our prayers
and candle wishes were all made
in wide-eyed innocence.

At night she kept
the light on and the curtains drawn.
I never knew her go out
after dark. She hated ivy and other plants
with tendrils – just once
I heard her say that they reminded her
of “them”.

No one ever doubted Aunt Em’s insanity
until, one night, they came
and spirited her away. I saw
the darkness explode
in shards of coloured light.

Now, at my daughters’ parties we play
hide and seek, but never blind man’s buff.
Each evening we check the closet
and beneath the beds
before I read a story. Then
I pull the curtains tight and leave
a nightlight burning.

But now I’m on a roll. Talking of skeletons has reminded me of this photo of what I think is the skeleton of a wooden boat:

And now we’ve got a second picture, maybe we should have a second poem with bones in it. It’s also old, but it’s the first time it’s appeared here.

We thought that time was ours
for the taking, but instead of taking time
to explore, investigate, hoard up
discoveries in memory, we wasted it
on petty arguments, unnecessary doubts.
Now I find particulars elude me,
specifics, ins and outs: I can’t recall
the details of your body, never learned
its nooks and crevices, its curves
and folds. I’m sure the basic structure
is the usual – the thigh bone connected
to the hip bone, five finger bones
connected to each hand – but cannot visualise
your thigh, your hip: the forms I long for,
those fingers whose touch haunts me,
are as unreal in my mind as the body
of a dress shop mannequin.

So, I sat down about an hour ago without any idea of what to write; now, although I haven’t exactly done any new writing, I have linked together some ideas and images and created a connected text that didn’t exist before. I don’t think I’ve done so badly, after all.

3 thoughts on “skeletons in the archive”