Trains were a major feature of my childhood. I don’t know how many times I’d actually been on a train before my first birthday, but I do know that I had already travelled from the south east of England all the way to the Highlands, a journey that, even today, would be likely to take the best part of a day.

Even when we returned to live in the south a few years later we didn’t own a car so my father commuted to London by train and underground each day, and any holiday we took tended to feature traditional black cabs and card games played in waiting rooms at railway junctions.

The books of my youth were full of trains, too: not just Thomas the Tank Engine – though who can forget Jeremiah Jobling’s leather boot laces? – but The Railway Children, the train accident that takes the Pevensie children back to Narnia for The Last Battle, and Maria Merryweather’s journey to Moonacre in The Little White Horse.

When a hansom cab wouldn’t do, Sherlock Holmes was forever boarding a train – after Watson had consulted Bradshaw, of course – and Agatha Christie had The Mystery of the Blue Train, 4:50 from Paddington and The ABC Murders.

There’s comfort, then, for me, in trains and taxis – a feeling of familiarity and the security of family – and perhaps those long sleeper-train journeys, taken when I was scarcely old enough to know what was happening, explain why, even now, if time were no object and I were offered the option of travelling in a shared wagon-lit or by plane, I’d opt for the former.

And no doubt it is this sense of comfort and familiarity that made my heart leap with delight when I happened upon steam locomotive No. 4965 Rood Ashton Hall waiting patiently at Moor Street Station last night.

Moor Street itself is a small joy, just moments away from New Street but beautifully restored and refurbished in 1930’s style. The lattes and panini sold at the cafés are too modern for my taste, but the fact that you can sit at a little table on the concourse and watch the world go by is one of those time-from-the-world pleasures that train travel affords. 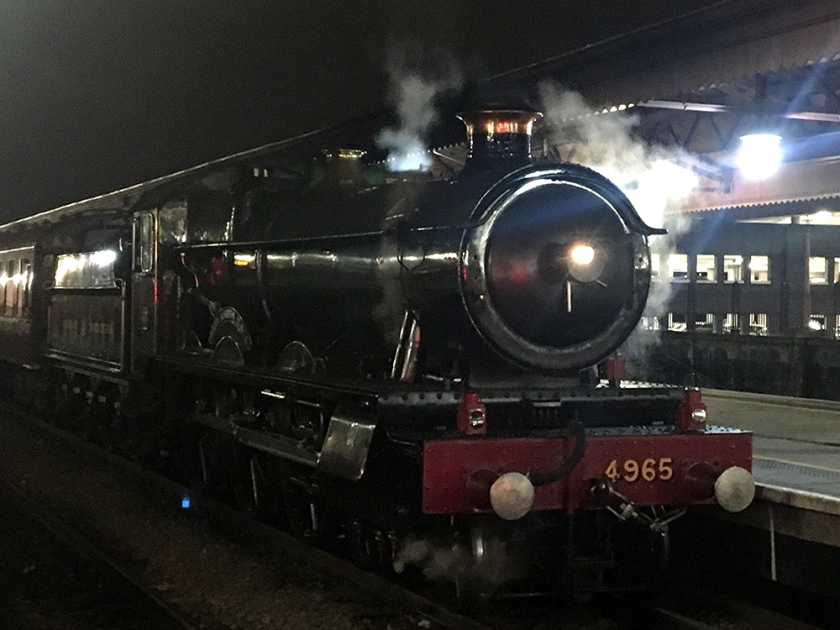 Trains pass to and fro through my poems, although, perhaps surprisingly, I don’t seem to find them playing a leading role anywhere. In this piece, it was the lack of train that gave me time to pause and start writing.

The train’s delayed and while I wait,
I gauge my luck – or lack thereof –
in magpies: the furl of caping wings,
and splay-tailed swoop to perch
high in the winter cage of track-side trees
whose trunks are evergreened by ivy.